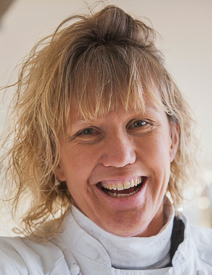 Heather's cooking is legendary in Steamboat where she oversees the menus and food preparation for all of our chalets and catered events. She has appeared several times on Steamboat TV18's cooking show and breakfast TV and was featured on the cover of the Food Section of the Denver Post.

Her cooking career began on a yacht in the Caribbean and she refined her skills at Cordon Bleu, the Culinary Institute of America, and at the International School of Baking in Oregon.  She has authored her own cookbook "Simple Pleasures" which highlights some of her most successful creations, plus many old favorites.

She has skied since her high school years but switched to snowboarding on arrival in Steamboat. Now she alternates between the two disciplines as she attempts to keep up with her kids, Maddie and Chili.